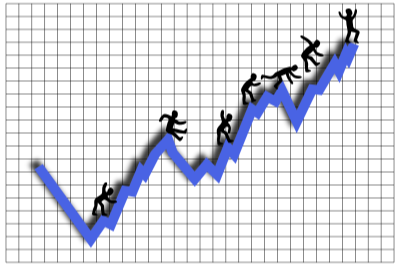 In All of Time

Perspective matters a lot whenever we compare or rate things.  Google search “of all time” and you get an incredible list of opinions and rankings of the greatest songs, movies, musicals, sports players, etc.  Many will call Michael Jordan, Tiger Woods, Wayne Gretzky, Tom Brady, etc. the G.O.A.T., the Greatest Of All Time in their respective sport.  But the thing is, every one of those measures is subjective by the person making the pronouncement.  Sports figures have lots of statistics, but how do we compare basketball stats to golf stats (for example) to rank the GOATs?  And who is the final arbiter of music, theater and other more subjective rankings?

Fortunately for investors, things are a lot more definitive.  When someone says “the market reached an all-time high”, it is pretty clear what that means.  But it is really useful to think about what that phrase really embodies so you can use it as a way to put the market’s movements in perspective.

Let’s turn the phrase around a little bit to make things starker.  The last time (as of this writing) that the market hit an all-time high was on January 4, 2022 (measured by the S&P 500).  But another way to think about that is that as of January 4, 2022, the market was higher than it had ever been In All Of Time.

We have been measuring various stock markets for centuries since the first official exchange was formed in 1773.  Some of our current tracking indices like the Dow Jones Industrial Average (DJIA) and Standard & Poor’s 500 (S&P 500) were initiated in the late-1800s or early 1900s, over 100 years ago. Stop and think for a bit about what has happened since 1900 that would have impacted the stock market.  There have been wars, economic crises, political debates, social clashes, terrorism events, health crises just to name some major ones.  But there have also been scores of more normal things like economic cycles, recessions, inflationary periods, federal reserve meetings, earnings releases, etc.

Now think about what has happened in just the past 20 years.  We experienced one of the most significant market events in history - the global financial crisis in 2008-2009 that took the market down nearly 50%.  I remember that one distinctly because I spent a decent amount of time in the fetal position!  What I remember most was taking a long-planned vacation in March 2009 and the day we returned happened to coincide with the very bottom of that market.  That day was March 9, 2009 and the S&P 500 closed at 676.53.  On our most recent all-time high on January 4, 2022, the S&P 500 closed at 4,793.54.  The decline to that low point felt enormous and insurmountable in the moment but looks very small in the rear-view mirror.

When we say the market is higher than In All Of Time, it means that not only have we experienced every event in market history, the market has recovered from every one of them and proceeded to hit a new high.  That is a powerful perspective.  So, when we experience a momentary downturn in the market as we are now, keep in mind that it isn’t a question of if the market will recover, it is always a question of when.  You have to invest knowing you are willing to give the market the time and space it needs to recover.  By extension, that means that money you need within a specific timeframe likely shouldn't be near the stock market.  But for those who can wait, this recent temper tantrum will most certainly pass.